A must-see event for philately, MonacoPhil 2022 will take place from November 24 to 26 on the Terrasses de Fontvieille in Monaco. Alongside the commercial event, which will bring together around sixty international merchant and postal administration stands, the public will be able to admire “100 emblematic stamps and philatelic documents” from, among others, the collections of H.S.H. Prince Albert II and the Royal Philatelic Collection. In addition, two thematic exhibitions will be presented: one devoted to India, and the other to the postal history of the Great Army of Napoleon I. The block issued by the Office des Timbres refers to Napoleon's departure from the Island of Elba on February 26, 1815 and his chance meeting with the hereditary prince Honoré-Gabriel, future Honoré V, when he disembarked at Golfe-Juan on March 1, 1815. 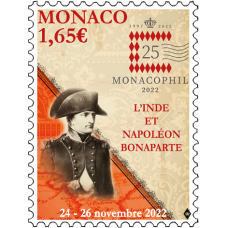 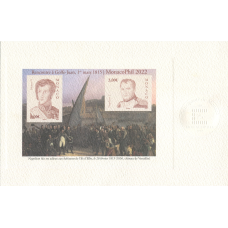 SPECIAL PRINT "NAPOLEON I AND HONORÉ V"
8.00€
Add to Cart