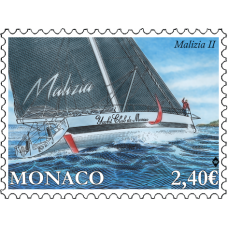 The Malizia II, which belongs to the IMOCA 60’ class, was launched in August 2015. As the Yacht Club de Monaco’s flagship ocean racing vessel, the Malizia II symbolises the Grimaldi family’s strong love of the sea. The yacht was named in honour of François Grimaldi, nicknamed “the Cunning” (“La Malizia” in Monegasque), who arrived in Monaco by sea in 1297 and established the Grimaldi dynasty. The Malizia II is the first Monegasque vessel to have participated in the Transat Jacques Vabre, in November 2017, with a crew led by Pierre Casiraghi.

EXHIBITION "MONACO AND THE OCEAN, FROM EXPLORATION TO PROTECTION"
4.40€
Add to Cart