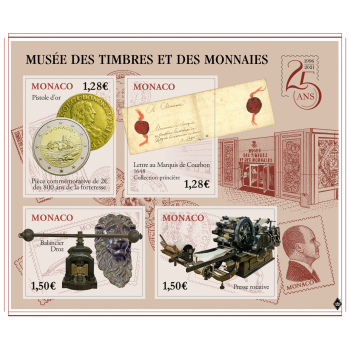 Established by Sovereign Ordinance of Prince Rainier III in December 1995, the Monaco Museum of Stamps and Coins opened to the public in January 1996. It hosts the stamp and coin collections of the Prince of Monaco, which are some of the most stunning and widely renowned in the world. The coin collection focuses on coins issued by the Princes of Monaco and finds made within the Principality during the nineteenth century. A special room houses rare stamps and coins during prestigious international exhibitions in which the museum participates. One of the things which makes the museum unique is that it also exhibits the machines and tools used to manufacture stamps and coins. A large stamp printing press and a large coining press, which was used from 1837 to 1838 in the mint then installed in the Prince’s Palace in Monaco.